Crystal Pepsi’s relaunch isn’t merely a case of reproducing a cult-favorite drink – rather, it’s an immersive, 360˚ brand experience that gives fans an opportunity to connect with the beverage like never before

We’ve written before on how powerful nostalgia can be when marketing to Millennials, and PepsiCo is the latest brand to tap into this tool with the US relaunch of their cult-favorite Crystal Pepsi drink.

Instead of reproducing the original ‘90s packaging, Pepsi created updated bottles that incorporate retro influences while also feeling like part of the current Pepsi family – a shrewd move, considering the nationwide rollout placed the ‘new’ product alongside all the Pepsi regulars. Plus, the cleaner look is much more Insta-friendly!

2. Kickin’ it live and in person

To bring the brand to life, Pepsi threw a “Summer of ’92” party in NYC, featuring artists Salt N Pepa, En Vogue, Biz Markie, and Lisa Loeb – as well as a ’90s hair salon, an arcade with classic ’90s games, and other throwback swag. This unique, 360˚ experience gave fans an opportunity to connect with the product like never before, while also providing plenty of sharable content.

3. Doubling down on Old Skool

To up the nostalgia quotient, Pepsi collaborated with the makers of the original Oregon Trail computer game to create ‘The Crystal Pepsi Trail’, an interactive game that lives on a website designed in the now quaint style of Geocities. The game itself contains a plethora of ‘90s references and includes plenty of screen-capture worthy progress updates alongside buttons for easy sharing on Twitter and Facebook. 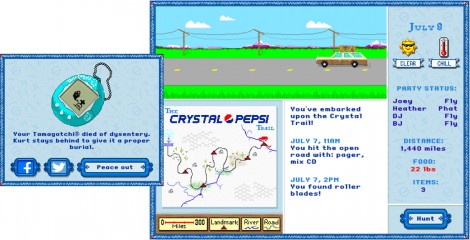 As a millennial with my own fond memories of Crystal Pepsi and Oregon Trail, I found this campaign’s unrelenting commitment to the ‘90s to be pitch perfect: I was excited to buy the soda, and I played the game at least four times.

The depth of this campaign is impressive, revealing a brand committed to its fans and consumers in a way that goes beyond the typical nostalgia marketing play.