In Rio, the Olympic values of inspiration, friendship, excellence, respect, and optimism were embodied not only by the athletes, but also by the rich visual brand language created for the games

The Olympic Games have drawn to a close, but the festivities in Rio aren’t over yet as the Paralympics and its ‘Superhuman’ athletes will be taking to the fields and stadiums in a few weeks.

Both sets of games – while generating hype, controversy, and advertising dollars – are nothing without the athletes that put their hearts, souls, and bodies into competition.

While the Olympics are never short of ‘human interest’ stories, these games have been especially rich with uplifting stories and momentous ‘firsts’: athletes from Kosovo, Fiji, and Puerto Rico have all won their countries’ first ever gold medals. The Rio games welcomed the first transgender Olympians and the first refugee team. Simone Manuel became the first black female swimmer to win a gold medal. North Korean and South Korean gymnasts took a selfie together. Kate and Helen Richardson-Walsh were the first married gay couple to compete at the Olympics (and win a gold!). And many a knee was bended as a multitude of marriage proposals took place.

From our own global research – talking with both consumers and experts (anthropologists, sports-insiders, academics) – done with the IOC, we know that profoundly human moments like these are what truly inspire Olympic fans around the world. 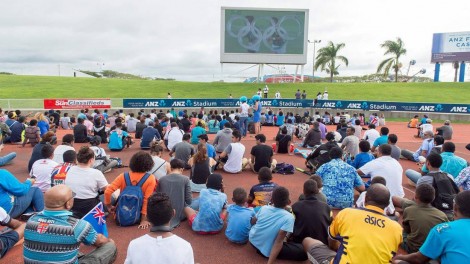 These inherently human moments demonstrate the power of sports to overcome the great adversities that face our world. Such moments are reflected and fostered by the values of the Olympic games themselves: inspiration, friendship, excellence, respect, and optimism.

But these values aren’t just embodied by the athletes, they’re also represented by the Rio 2016 visual brand language (VBL). Rio’s VBL rises to the challenge of expressing the greater Olympic values with bright, cheerful colors woven together and – in another Olympic first – a 3D logo, which features people holding hands in a circle.

The positive message that this VBL conveys is communicated throughout the Olympic Village, venues, and medals – as well as through TV broadcasts and other media. It reinforces the values for not only the athletes and fans in Rio, but for those watching around the world.

Smartly, the Paralympic VBL has been integrated with the larger Olympic branding, creating a seamless transition between the two events, and reminding the global audience that Paralympic athletes have their own remarkable stories to tell, both on and off the field.

With two such large-scale events, the VBL has much to accomplish and many areas in which it could stumble, but Rio’s gold medal-worthy visual branding rises to the challenge.