Designs of the Year exhibition 2013

Taking the advice of our very own Big Picture News Bulletin, I went to check out The Designs of the Year 2013 exhibition at the Design Museum in London Bridge. The show is a cross category exhibition displaying the cream of the design crop from the worlds of Architecture, Digital, Fashion, Furniture, Graphics, Transport and Product Design. The show presents category winners with the overall winner to be decided by a jury and announced to the public on 17 April 2013. 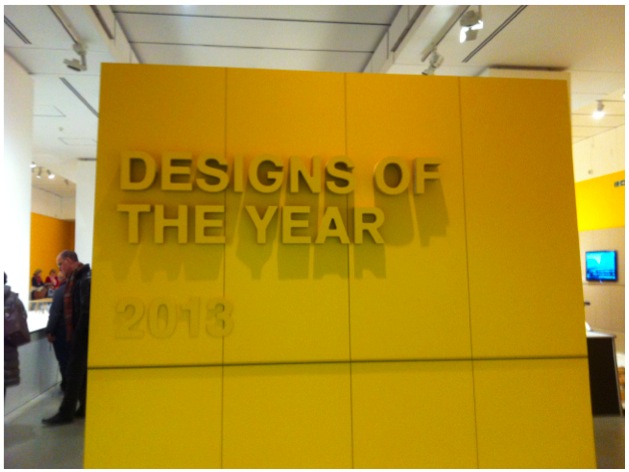 Medicine with your Coke? 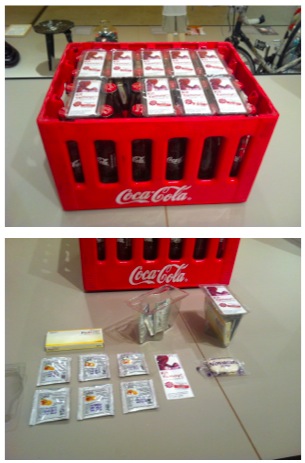 The first entry that caught my attention for its ingenuity and potential to change lives was the the Kit Yamoya anti-diarrhoea kit by ColaLife.

ColaLife founder Simon Berry saw the opportunity to improve the provision of life-saving medicines in remote areas of the world by using private sector networks to reach large numbers of patients in these rural locations. The idea was inspired by the fact that Coca-Cola is transported to even the furthest reaches of sub-Saharan Africa, beyond the reach of many medicines. The design, by PI Global, cleverly utilises the spaces between bottles in a crate to carry simple medicines such as oral rehydration salts, high-dose vitamin A, and water purification tablets that can save children’s lives.

A great example of a designer spotting an opportunity and executing it well – the bespoke packaging delicately interacts with the crate enabling the transportation of medicines to more communities for little or no cost. 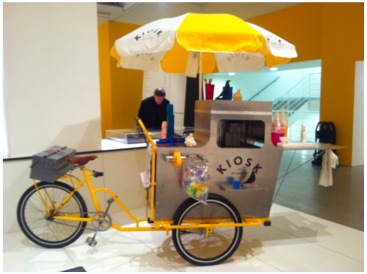 A bit of a “hot topic” at the moment (and one that our own Rosie Brodhurst-Hooper wrote about recently) is 3D printing, something I’m sure many future entries into The Designs of the Year could be a product of.

3D printing has recently been hitting the headlines for its huge potential in the daunting world of consumer-designed products.

Kiosk 2.0 is a mobile 3D printing cart by Belgian design studio, Unfold. The design tries to demonstrate that society could be more willing to embrace new technologies if they are presented in a more familiar and casual guise. Perhaps in the not so distant future 3D printing will become as affordable and accessible as buying a hot dog on the street! 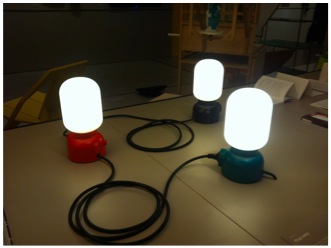 One product which really had me asking, “why didn’t I think of that!?”
was the Plug Lamp by Form Us With Love. A simple design for the modern day gadget lover: a lamp that incorporates a plug socket. This combination means all those phone, laptop and tablet chargers can be plugged into a socket housed in the lamp sitting on your table – so no more stretching to the nearest socket in the wall! This is a great example of how simplicity is often the key to great design, right down to the smooth, sleek curve of the lamp and bold coloured bases this creation oozes simplicity in both form and functionality. 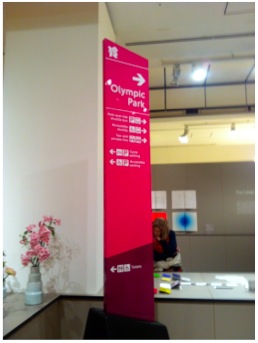 Obviously, the Olympics were mentioned at Designs of the Year too – not for the logo which split the nation but rather a more unexpected (yet deserved) mention for the London 2012 Olympic Wayfinding design by Jedco.

These beacons’ distinctive magenta design, juxtaposed against London’s old, winding streets and dark, grey architecture, created a clear visual language applied from the airport all the way to the venues. Hundreds of thousands of visitors were aided by the bright, angular additions to the capital’s streets, acting as a constant reminder of the spectacular events taking place in the city.

Another throwback to last summer’s Games is the Olympic cauldron by Thomas Heatherwick Studios. A model of the cauldron is on display, which is just as impressive as the original sculpture. You can also see one of the 204 full-size copper petals up close.

The Rijksmuseum in Amsterdam have developed a new graphic identity to coincide with their grand reopening after a huge renovation. The design is an interpretation of parts of the museum’s collection with a contemporary twist, whilst the colours chosen are ‘highlights’ of the various colours used within the collection. By using a strict colour palette and unique font, Irma Boom have created a strong unity and familiarity across all the museum’s different forms of communication.

The Designs of the Year exhibition will be running until the 7th July 2013 at the Design Museum and is definitely worth a trip.