Our hands-on review of the much-coveted iPad 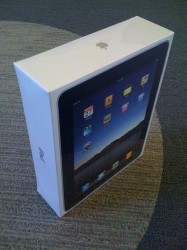 A while back, we joined the herds in blogging excitedly about the newly-revealed iPad. Since then, I’ve been privileged enough to get my grubby fingerprints on one and, a month in, it’s about time I put down my thoughts on the latest device to emerge from the secretive depths of Apple’s Californian headquarters.

First off, it is beautiful: crisp clear lines of reflective black glass and chiseled silver, it’s a masterpiece of engineering as much as anything. The device’s beauty is immediately defiled, however, by the first thing you’ll see on screen: the reflection of your own grinning, smug face at an deeply unflattering angle. And shortly afterwards, you’ll realise that with each touch you sully its perfection still further with your oily, imperfect human hands (so you end up making a choice between endlessly buffing it and using it as an expensive mirror, or embracing the muck).

And then there’s an odd moment when you first have it in hand, when you’ll ask yourself, ‘what do I do?’. To anyone who has had an iPhone for any length of time, it’s instantly familiar and just feels… well, pretty much the same, but bigger.

And that is, in essence, what it is: a bigger iPhone. But bigger here really is better. When the iPhone came along it felt faintly miraculous to have ‘proper’ internet, email, maps et al in the palm of your hand. iPad gives you all that but makes it feel more comfortable for longer use. So I’ll happily browse the internet, where on iPhone I’d just use it to find something out and be done with. Or I’ll write a full email, rather than note down thoughts in draft for typing up later.

Then there’s the apps. As with the iPhone, the things you can do with it are expanding all the time thanks to the App Store. iBooks turns iPad into an electronic book reader, which feels natural, comfortable and – dare I say it – maybe even a bit better than a book (you can touch a word to see a definition, for example). Google Earth feels like it was made for iPad all along. Keynote is surprisingly easy to operate. And then there’s all sorts of other things you might not have thought of, like Air Display that turns it into a second screen for your computer.

The big question for me before I got it was all about when and where I’d use it, and whether there really is that magic niche between smartphone and computer that Apple believes there is. Truth be told, I’m still not convinced. iPad has replaced some occasions where I’d use my iPhone, and some others where I’d use a computer. Although there’s no need for it if you’ve got both of these things, it’s such a joy to use that you make space for it simply because it’s better than both devices at most things.

The problem is, it’s not quite fully-featured enough to replace a ‘proper’ laptop (no USB, no CD drive), and it’s certainly not a phone, so can’t possibly replace a smartphone. As Apple says on its ads, though, “it’s just the beginning”. There is a sense that this is the first step in something much bigger. Cloud computing, whereby files and software are stored on a server and are remotely accessed by a device (rather than stored on it), is looming, and could represent a future where computers, with all their storage and ports are unnecessarily convoluted (not to mention expensive). But we’re not there yet, so in the meantime iPad is a distraction. A beautiful, shiny, joyous distraction.