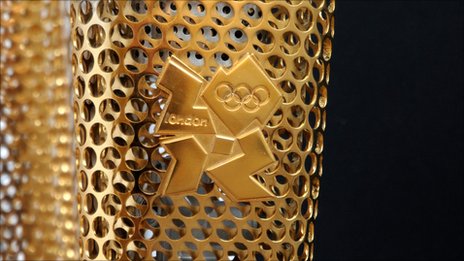 The 2012 Olympic Torch was unveiled this week by Lord Coe and Olympian Denise Lewis, and will begin its 8,000 mile journey to the Olympic Stadium in May next year (they’re not taking the most direct route). The Torch is the work of East London design house Barber Osgerby, whose other work includes the Tip Ton Vitra tipping chair, an inventive take on school seating – which we rather liked back in April. We would be lying if we said it didn’t prompt discussion in TBP Towers so we thought we’d give our view of it.

The Torch has a unique back-catalogue of over 70 years of design and cultural influences applied to a homogeneous product. The last two decades have seen an increase in the freedom of expression, in part facilitated by advancements in technology, with varying degrees of success – the Sydney Olympic Torch is an elegant and contemporary take on the concept, and we’ll let you draw your own conclusions on what Philippe Stark had on his mind when designing 1992 Winter Olympics Torch… but for us nothing will ever be as iconic as the original Torch designed for the controversial 1936 Games; an elegant yet simple design, reminiscent of the wonderful timeless work of Dieter Rams.

You can pick your favourite here, thanks to The New York Times’ interactive guide to the history of the Olympic Torch.

Barber Osgerby have woven a great deal of symbolism into the London 2012 Torch’s multi-layered design, not least the 8,000 holes that create the perforated surface. Each hole represents one of the 8,000 Torchbearers that will carry the Torch on its journey to the Olympic Stadium next July, the majority of whom will be nominated by local communities in recognition of their personal achievements that are felt to bring to life the Olympic spirit. So in a sense the Torch represents something personal for each of the Torchbearers, supporting the 2012 policy of inclusivity and community. The reference to these inspiring stories through design adds depth and a credible rationale to the aesthetic. Its lightweight composition also demonstrates an attention to detail and pursuit of performance that marries with the athletes’ own journeys. 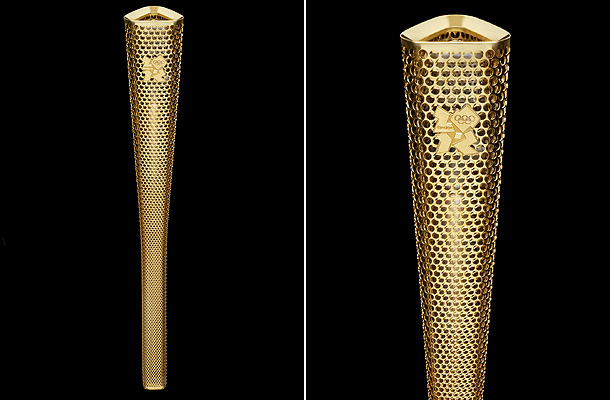 There is a sense of finesse and elegance to the profile, which imbues the Torch with the kind of majesty befitting the event. However, there is a fine balance between conveying excellence through design and appearing indulgently extravagant. Detractors argue that the 2012 Torch flirts a little too closely with a sense of ostentatious ‘bling’.

And when viewed through more critical design goggles, it’s easy to let your mind wander… Picture the scene; you’re channel flicking and stumble across the music channels just as 50 Cent’s new video pops up. In the first 5 seconds before you question what on earth you’re doing still watching this, the camera glides through a set of giant gates, up a stone-covered driveway embellished with sports cars and scantily clad women, eventually reaching the grand entrance where you are greeted by Mr.Cent, flanked by a couple of these Torches lighting the night air.

But in our view, the Olympics are the most famous sporting event on the planet, so if anything deserves the grandeur of a one metre tall, intricately detailed golden torch to celebrate its commencement, it’s the Olympics.

The rationale behind the design embraces much of what makes the Olympics great and what won the UK the Games in the first place – it’s a strong design that the UK as host nation can be proud of… so you can sleep easy now, Lord Coe…