Olympic standout, destination branding and a-maze-ing exhibits at the London 2012 Festival – the weekly news bulletin has it all… 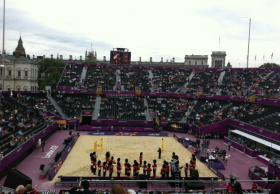 This week, team TBP made its way to the Horse Guards Parade in central London to watch the Olympic beach volleyball and support team GB (who sadly lost out to Norway). In spite of general criticism towards the Olympic’s bold branding, we couldn’t help praise the abundance of fuchsia signage that seemlessly led us to our venue. We were also rather impressed by the distinctive purple and red volunteer outfits, which despite their air of Dick Dastardly, looked smart and had firm standout amidst the crowds.

Thanks to local design agency SomeOne, London’s Victoria district now has a new identity.  The ‘destination branding’ project was commissioned by Land Securities to imbue the area with a sense of personality. And we think they’ve done a pretty good job at reflecting the business and transport hub – which is home to 100 million passengers every year.

Tesco in the US recently collaborated with P&W to overhaul the design of their organic Fresh & Easy line. Adopting a masterbranding approach (and applying green to all SKUs), the range now has strong brand blocking on shelf. In addition, the logo has been updated to introduce a clock-apple (‘clapple) device to act as a visual pneumonic for Fresh & Easy.

Finally…should you be suffering from Olympic-overkill, make sure you sprint over to Southbank’s London 2012 Festival and lose yourself in this maze of books. On show in the Clore Ballroom until August 26th, this labyrinth of literature (code name ‘aMazeme’) is based on the fingerprint of Argentinian poet and author, Jorge Borges.