This week we talk about the importance of multi-sensory branding, a topic The Big Picture will be talking about in the AQR Being Human Conference this week! Also featured is an edible billboard from Nakd, rock-inspired cosmetics packaging and a gin bottle that tells the story of Prohibition America!

The article ‘Designing For All Five Senses’, by Yasushi Kusume, talks about how multi-sensory design can be applied to all brand touchpoints to create a more emotionally engaging and memorable consumer experience. The importance of brand design, and therefore research, that engages all five senses is something The Big Picture will be talking about during The AQR Being Human Conference this Thursday – maybe we’ll see you there!

Last week snack brand Nakd set up an edible billboard outside Shepherds Bush station in London, as part of their ‘Find your Fav’ campaign. By allowing commuters to taste all the different varieties on offer, the stunt aims to create awareness of the brand and position it as a healthy, convenient snacking essential. This comes almost a year to the day after Mr Kipling unveiled ‘the world’s first edible billboard’ made entirely of cake!

While Deluxe Distillery’s Blind Tiger Gin has a bold, modern design style, it is in fact a product inspired by  1920’s Prohibition America. The name itself pays tribute to the speakeasy establishments of yesteryear that circumvented strict liquor laws by selling tickets to see a ‘blind tiger’ backstage – in actual fact the attraction would usually be a farm animal with a ‘complimentary’ gin cocktail thrown in.

Design agency Reynolds and Reyner has created an eye-catching structural design for LaPierre Cosmetics to signal the beauty ranges premium position. The design is inspired by the formation of rocks, which not only acts as a reference to the strength and hard-wearing product quality but also directly links to the brand name – la pierre means ‘a rock’ in French.

British crime thriller Legend, starring Tom Hardy, has been receiving a lot of attention since its release – but not all of it stems from Hardy’s acting or even the film itself. The film’s marketing poster has been cleverly, and somewhat sneakily, designed to accommodate a less than satisfactory two star review – see if you can spot it!

Tweet us if you think you know what this NTB is! The answer to last week’s can be found here. And then, if you fancy the challenge, play the full game right here. 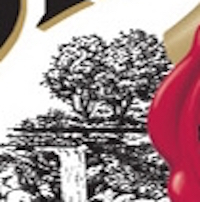