Baguette packaging, baby food and beer (not at the same time obviously). The final News Roundup for May has it all… 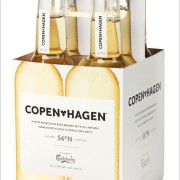 Carlsberg’s new Copenhagen beer recently sparked feminist debate when it was hailed as a ‘beer for women’ thanks to its rather sleek, stylish packaging. Quite a revolutionary design when compared to the likes of Carlsberg Export, but we’re fully in favour of this modern, rather premium-feeling spin off. 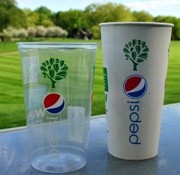 In a giant step for sustainability (and leap for mankind), PepsiCo is poised to roll out 5 eco-friendly alternatives to its plastic and paper cups that are both fully recyclable and compostable.  The cups will be offered to Foodservice customers at restaurants, stadiums, theme parks and colleges throughout the US, and are made from plant-based materials sourced purely from sustainably-managed forests.

Baguette emporium Upper Crust recently unveiled their first ever UK ad campaign together with a plethora of new packaging. Tapping into that cheeky (annoying?) tone of voice that’s very du jour (Oasis ‘It’ll go with anything campaign’, anyone?), unfortunately this packaging lacks all the visual equities which serve to remind us of Upper Crust. Back to the chopping board?

When I was young, baby food never looked this good: 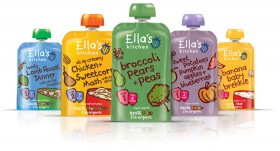 Ella’s, the organic kids and baby food brand, has partnered up with design agency Blue Marlin to rejig their packaging in order to bolster shelf standout and range navigation (no easy task, given they’ve 68 products on offer… and counting). An evolutionary design, the new look cleans up the pack to facilitate a clear messaging hierarchy, and seeks to ‘future proof’ the brand ahead of International expansion. Blue Marlin global CEO Andrew Eyles comments: “The new look is bold and impactful; it strengthens the branding and navigation whilst retaining the unique and characteristically Ella’s equities”. 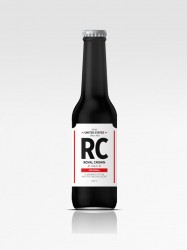