With more stories than Peckham Library, more packaging than 65 screws from Dell and more irreverence than a pope lunger, it must be The Big Picture’s news round-up

With more stories than Peckham Library, more packaging than 65 screws from Dell and more irreverence than a pope lunger, it must be The Big Picture’s news round-up – your intermittent guide to what’s important in the world of design, packaging and marketing (and plenty of what’s not important but still interesting). 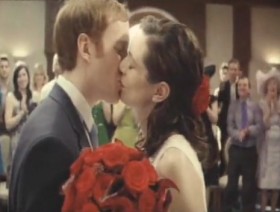 2010, ay? It all seems so last year already. Marketing magazine’s marketing moment of the year was John Lewis’ moving ‘Always a Woman‘ advert. Rather puts those We Buy Any Car ads to shame. Meanwhile Imagination came in as the top ranked design agency again.

Marketing Magazine’s Sector Insight on the hotly-contested world of laundry products estimated that in 2010, P&G (Ariel, Fairy, Bold, Daz) had a 45% share of the UK to Unilever’s 32% (Persil, Surf) and Reckitt Benckiser’s 6% (Calgon).

PepsiCo UK has pledged to shift its Quaker and Walkers brands to paper packaging within three years, according to Marketing Week. The material is being used at the moment on Red Sky.

Caffeine factory Starbucks has refreshed its logo to mark forty years in business. The biggest change is the dropping of “Starbucks Coffee” from around the edge. The result is a clean, modern and – importantly for their business plans – very flexible mark, reminiscent of Apple and Nike. More here from Brand New.

And while we’re on logo changes, the abandoned Gap logo won Brand New’s worst logo of 2010, while PWC’s logo change (pictured) was voted the best.

Unilever will use Apple’s iAd mobile advertising network for their new Lynx Excite range, according to Marketing Week. iAd is a software platform which enables advertisers to build rich content (like videos, games, downloads & purchases) in their ad within the app – previously iPhone ads yanked you out of the app and onto a website. It is also, of course, another means for Apple to line their already sickeningly golden pockets.

The future is Citysumers, according to trendwatching’s February report. Citysumers are the hundreds of millions of urban consumers who are “ever more demanding, more open-minded, but also more proud, more connected, more spontaneous and more try-out-prone, eagerly snapping up a whole host of new urban goods, services, experiences, campaigns and conversations”.

What adverts really wind you up? My personal bugbear is Compare the Meerkat. It was mildly amusing at first, but it’s been too long now. For my money, if Compare The Market want to avoid confusion with meerkat-comparison sites they probably shouldn’t cover all their marketing materials in meerkats. In any case, whichever your most-hated ad is, there’s a good chance it was made in-house as One Marlin reports.

Stranger & Stranger produced this stunning limited edition absinthe, which they’re doing a short production run on if you’re into that sort of thing.

When The Moderns were designing packaging for Berry+, a berry-based (yes, you read that right) laundry detergent, they decided that since the product was breaking from the category, so would the packaging. Each microdose has enough concentrated soap to clean up to 30lbs of laundry, while the outer packaging is 80% non-GMO, plant-based bio-resin clamshell – which means it’s a shedlot lighter than plastic tubs, too.

7UP has a new design for international markets (including Canada, Germany and Spain) by TracyLocke. Great work on cleaning up and modernising the identity without sacrificing immediate identification.

I’m fairly sure this is pretty packaging. Either that, or I’m getting distracted by all those legs. Nordstrom Hosiery, by Turnstyle.

When jam, an inherently lovely substance, combines with some lovely packaging, the net loveliness is powerful stuff indeed. Such is the case with this packaging, by Springetts.

Coley Porter Bell have revealed this visual identity for Jameson whiskey for their outer packaging, which aims to be simultaneously contemporary and traditional.

The illustrators at ILoveDust have gotten their pens out for this packaging of Kiehl’s hand cream.

Do you like art galleries but can’t face the crowds? Fear no more, Google Art Project is here. Visit MoMA, the National Gallery, Tate Britain, the Rijksmuseum and many more through a sort of cultural version of Street View.

Fans of legendary(ish) News favourite “Name That Brand” will be excited by this quiz – 26 logos, one for each letter of the alphabet. I’m not bragging (although, clearly, I am), but I got all 26. How many can you get?

Logos for sporting events have produced some stinkers over the years, not least of which our very own for London 2012. But I’ve got to say I’m a big fan the new one for Rio 2016, designed by Brazilian agency Tátil. When you think its design brief was to capture notions as abstract as “harmonious diversity”, “Olympic spirit”, “contagious energy” and “exuberant nature” in a single mark, I think it’s done a fine job. Brand New’s opinion here.

Are you a Comic Sans Criminal?

Explore the Turner Duckworth studio with The Dieline.

In the last news, I was dreading the prospect of an avalanche of souvenir tat associated with the royal wedding later this year. Brilliantly, there’s been some fantastic ironic crockery produced, as Creative Review reports.

Twitter saw 25b – yes that’s 25 billion tweets last year, from the momentous to the ‘romantic’ to the banale to the inadvertently hilarious. The top trend of the year was the BP Gulf oil spill, followed by the World Cup. Pulpo Paul the psychic octopus (RIP) ranked at 10. Why not follow us?

Everyone’s favourite part: it’s Name That Brand, where we harness the dark forces of Photoshop’s crop tool to cleverly mask the identity of a famous brand. The last one was Lush.