Time for a news round-up: just think of us as your faithful news sheepdog, busily rounding up those pesky news sheep and penning them for you. We get a range of breeds round these parts: design news sheep, marketing news sheep, research news sheep … as well as the occasional black sheep which doesn’t neatly fit with the others.

The iPad was the big winner at the Design Week Awards this year. We blogged on the night and the winner here, and did a detailed run down of the category we sponsored – Consumer Product Design – here. Oh, and if you’re lucky enough to get your grubby hands on an iPad 2, why not splash out on a wood cover?

Purveyors of fine chips McCain have relaunched their portfolio with new designs which adopt a more brand-led proposition. We researched the designs, by Brand Opus, and we think they’ve made a rather good job of it. They’ve successfully moved beyond the now-generic ‘potatoes’/ingredients message to add warmth and meaning to the brand, and place it back at the heart of the pack.

The sun has his proverbial hat on, Wimbledon is just around the corner, and accordingly Britvic is set to launch a range of boiled and jellied sweets under the Robinsons brand this coming June. They’ll come in quintessentially ‘Robinsons’ flavours including Orange & Barley, Apple & Blackcurrant and Summer Fruits.

PepsiCo are set to pilot the world’s first PET-free bottle next year. The bottles have the same molecular structure as standard PET, and use grass, pine bark and corn husks amongst other raw materials. The drinks giant believes that in the future they could encompass waste products such as potato peelings from Lay’s crisps, and even orange peel from its Tropicana production lines.

The move is a one-up on archrivals Coca Cola, which is reportedly working on a similar bottle but is a few years behind.

Tubular brand Pringles has been sold by P&G to Kettle Chips owners Diamond Foods for a stonking $2.35bn. Since launching in 1968 (named after a street in Finneytown, Ohio because it sounded nice), Pringles now claims to be the biggest crisp brand in the world, selling in over 140 countries worldwide.

Unilever’s pioneering ‘real beauty’ campaign for Dove, first launched in 2004, is set to be replaced. The new campaign, by Ogilvy London, focusses on ‘body language’: how Dove products make you feel confident and attractive. If they don’t use this song, they’re missing a trick.

Brand managers: show a little love. That’s the current trend according to the folks at Trend Watching: Random Acts of Kindness. Social networking means that brands that show their human side will connect better with consumers. One example is Interflora, who used Twitter to find people who were feeling down and sent them a bunch of flowers. In another example, Spanish airline Spanair surprised travellers on a late Christmas Eve flight by sending out personalised gifts on the luggage carousel.

Creative Review has published its Top 20 logos of all time. Top of the Pops is the 1964 Woolmark logo which has since spawned a thousand imitators. The mark is reportedly by Francesco Saroglia, an Italian graphic artist who won the design competition for the logo, but scant else is known of the man. This lends credence to the other story that the mark was by Franco Grignani, who used a pseudonom because he was on the judging panel for choosing the winner. 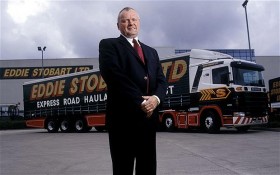 Edward Stobart sadly passed away last week, aged 56. Amongst his other achievements, he’ll be remembered as the man that realised the value of branding to road haulage: his lorries are quickly recognised on the roads, his drivers all wear a shirt and tie (and are instructed to give a cheery wave to anyone that recognises the brand on the road), and his idea of naming each lorry led to a 35,000-strong spotters club. JKR’s blog has more here.

Eurostar has rebranded with the help of SomeOne. While there’s little doubt that the original identity has been showing its age for a while, personally I’m not sure about it as a mark. While the typography is just right (a crisp blend of modernity and style), the expressive, sculptural, three-dimensional ‘e’ mark seems somewhat incongruent with the copy. That said, there does appear to be some mileage in it as a visual brand language – all those twists and turns seem much better when applied as an intrinsic identifier of the brand than it does rather disharmoniously plonked over a picture of Paris. I guess time will tell. Brand New has its say here, and JKR here.

Design is important. But don’t take our word for it, read this article on Marketing Week’s survey: 94% of the marketers surveyed said design was “very” or “somewhat” important to their competitiveness.

Jack Daniel’s is launching this honey liqueur. The packaging, by Nathan Hinz, brilliantly balances the brand’s equities and values with the communication of a new product line.

There’s been plenty of work into making light bulbs sustainable over the years (not least of which the recent Brit Insurance Designs of the Year winner, Plumen), but less has been done to improve the packaging. That’s something this student concept attempts to tackle: the packaging is bio-degradable and can be reused as a planter if the mood so takes you. There’s also a smart mood-based labeling system which aims to simplify all that meaningless lumens and watts nonsense.

Tea, vodka and lovely packaging: what a wonderful combination. This is Deep Eddy’s tea-flavoured vodka, and the packaging employs the kind of boutique retro vibe that is so ‘hot right now’.

More evidence if it be needed of the increasingly blurred line between own labels and private labels: this is In-Kind, Safeway’s new personal care range. The packs have been designed by Pearlfisher.

This artwork and the packs here are the result of a collaborative project between Malibu and artist Niark1.

Domino’s are rolling out these ‘Pizza Proverb’ packs, which feature a vintage-style illustration alongside snippets of “pizza wisdom”.

This photograph tells you everything you need to know about photographer Irina Werning’s ‘Back to the Future‘ project. She recreates a childhood photograph with the grown-up in as much detail as possible.

Here in the UK the inevitable torrent of tat associated with the Royal Wedding is coming in thick and fast now. This, however, is quite brilliant: Will ‘n’ Kate condoms.

This innovative bird-housing project in the London boroughs of Chelsea and Islington is rather natty.

Iceland’s tourist board sure knows how to make a promotional video: with beautifully shot landscapes and the occasional splash of nudity.

The CoolBrands 2010/11 list has been published. The list is an annual rundown of the hottest/coolest brands as decided by an expert panel and over 2,500 members of the public. Alongside the more predictable fare like Apple & Virgin, there’s also recognition of brands as diverse as Tiger Beer, Spotify, the Royal Albert Hall and Jelly Belly. Flick through the digital book here.

Beleaguered Kentish seaside town Margate is getting geared up for the 16th April opening of the new Turner Contemporary gallery by David Chipperfield Architects. The Guardian’s art experts have written an article on it here and there’s a video interview with the architect here. The project has been through stormy waters after the original design by Snøhetta and Spence was abandoned at great expense. Fingers crossed the building proves to be the catalyst for regeneration it’s hoped to be.

We’ve been going through our Google Analytics in detail and all those graphs have informed us that a there’s a large crossover in the Venn diagram of our readership between cat lovers and Mac users which is not currently being fully exploited. Consequently, we’ve sourced this link to target that key demographic niche: Cats in front of Macs.

Last but probably best, it’s the World’s Favourite Feature (possibly), where we investigate the psychological entrenchment of corporate values as identified by the degree of recognition of the iconographic visualisation of tested companies. Yes: it’s Name That Brand, where we crop a bit of a logo and see if you can recognise it.

The last one was Paypal.