This year’s best Christmas shop windows in NYC are highly sophisticated, but still convey the senses of wonder, magic, and whimsy that are the hallmarks of this festive time of year.

The Rockefeller Center tree has been lit, and the holiday season is very much underway in New York City, despite some unseasonably warm weather.

As per long-standing tradition, department stores and other retail flagships have gone all-out to create festive magic for shoppers bustling along 5th Avenue and the other retail thoroughfares. In the spirit of celebrating a festive season and creating aspirational, escapist spectacles, many stores elevate the artistry and visual side of ‘visual merchandising’ above the products on show.

This year, I was especially taken by the displays at three stores that seem to out-do themselves year-over-year:

In keeping with the small, precious objects that they sell, Tiffany’s windows are like small jewel boxes holding a myriad of wonders.

The diorama style of the windows this year managed to convey simple scenes upon first glance, but further inspection reveals small worlds filled with elaborate detail and hyper-realism created with forced perspective – some of which isn’t even visible from the vantage point of a taller viewer, such as myself.

While all of Tiffany’s windows do incorporate jewelry, these items almost seem like incidental afterthoughts – instead the artistry of the display itself is the star of the show.

One of the older, more traditional department stores, Bloomie’s takes a decidedly avant garde approach to Christmas this year, enlisting eight different visual artists to create chandeliers that reflect their individual interpretations of the word ‘light’. 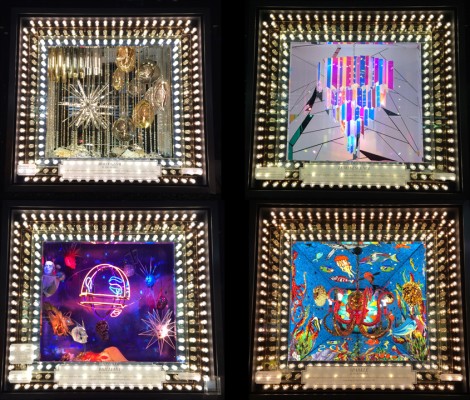 While two of the windows do feature clothing and accessories, these displays are really all about the artists, with names, background info, and websites provided at the base of each window. But in a city where everything is for sale, there is even a chance to buy the chandeliers on show via a charity auction!

Bergdorf’s always makes the most of their huge windows facing 5th Aveune by picking a creative theme to illustrate and bring to life in their signature lavish, layered style. This year’s theme is ‘Destination Extraordinary’, which has been expressed via eight elaborate tableaus that evoke a haute couture version of the dioramas found in natural history museums.

In keeping with Tiffany’s and Bloomingdale’s the clothes are hardly the focal point of these displays. Instead, the richly expressed scenes whisk viewers away to exotic and fantastical locales – and the theme is even carried through to their jewelry windows and the Bergdorf Goodman Men’s store across the avenue.

All three of these approaches to Christmas windows are notable for being distinctly grown-up, but still conveying the senses of wonder, magic, and whimsy that are the hallmarks of this festive season.